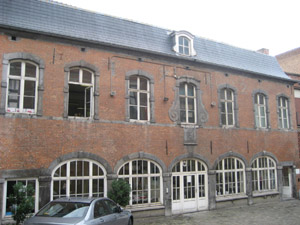 The Auschwitz Foundation was founded in 1980 by Paul Halter, an Auschwitz survivor. Replacing the Amicale Belge des Ex-Prisonniers politiques d’Auschwitz-Birkenau Camps et Prisons de Silésie, the primary objective of the Auschwitz Foundation is to study the history and memory of the victims of the Holocaust and the Nazi terror in a sustainable and systematic way. The transmission of memory and the preservation of archives concerning these events complete this goal.

On the other hand, the Auschwitz Foundation does not want to limit itself to Auschwitz or the Holocaust, and this is expressed in the interest the Foundation has in all mass crimes committed by authoritarian regimes. The work and projects it carries out are resolutely multidisciplinary and extend to all mass crimes and crimes committed in the long historic term or in contemporary history.

To carry out this considerable task, the Auschwitz Foundation set up a Study and Documentation Centre in 2004: Remembrance of Auschwitz. Thanks to this new institution, which has a permanent staff of ten specialists, the promotion of scientific research and multidisciplinary publications has increased significantly.

In addition, the Auschwitz Foundation was recognised in 2010 as a Resource Centre by the Wallonia-Brussels Federation in the framework of the ‘Memory’ Decree.

On the one hand, Remembrance of Auschwitz is active in the educational sector, but it is also involved in the context of lifelong learning in order to promote and develop awareness and critical knowledge of the realities of our society.