Projects Focusing on the “Marolles-Midi” District of Brussels

Reminiscences of the “Marolles-Midi” district

The Auschwitz Foundation’s premises are located in the heart of what from the 1920s until the Second World War was the main Jewish quarter of Brussels. The Jewish community had arrived in successive waves and had settled around the South Station, notably in the Marolles district, but today its presence seems to have been almost completely forgotten. As a result, it is difficult to discover its traces. If they exist at all, they are essentially to be found in the memories of those concerned, or among historians. What remains on the ground? Would it be possible to “reconstitute” Jewish life in the quarter? It is worth recalling why so many of these Jews had fled the poverty and violence in their countries of origin, and, from 1933 onwards, from the Third Reich and the countries it invaded? At that time, victims of persecution saw Belgium, which was relatively welcoming, tolerant, and rich, as a desirable place of refuge. We will then go on to examine in more detail why these people chose to make their homes in Belgium, and more particularly in the Marolles. Another angle of approach will be describing the difficulties inherent in any forced migration, in making a new home, and the procedures for becoming an official resident in Belgium.

We would like to describe this period in the district’s history, notably its socio-economic fabric, in such a way as to bring it to life as fully as possible. Were there internal or external assistance networks for the immigrants, and where did any support come from? How did the district’s cultural life develop? What about relationships with the locals and with other immigrant communities? The experiences of these new arrivals during that period are likely to be similar in some ways to certain problems which are still current in Belgium today, but for the Jews of Belgium in the last century the situation changed dramatically with the German occupation. As in every country which they occupied or which collaborated with them, the Germans flouted the legislation that protected Belgium’s inhabitants, and established procedures for wiping out the Jewish community by registering, marking out, isolating and then deporting it. How did they proceed in the Marolles to achieve their goals (census, creation of the Association des Juifs en Belgique [the Association of Jews in Belgium*], obligation to wear the yellow star, ban on working, owning a business, etc)? What anti-Jewish measures were adopted? How did members of the community and their neighbours react? Did some Jews succeed in protecting themselves or escaping? What were their possibilities of resistance? And who helped those in hiding? Of course, the round-ups and the deportations to Auschwitz spread terror and made the situation of those left behind still more precarious. The answers to these questions, notably in the form of an exhibition, will enable us to retrace the way in which the Jewish population of the Marolles lived before the deportations. To illustrate that way of life, we will seek out statements and documents left behind by witnesses, as well as anecdotes revealing the human side of these historical events.

* NB: the Nazis wanted an association of “Jews in Belgium” rather than of “Belgian Jews” because some 50% of the Jews resident in Belgium did not have Belgian nationality.

By resurrecting the “Jewish Marolles” as a centre of Jewish immigration, we will be able to highlight the district’s extremely rich social fabric. Thus we will be able to link the past and present history of the Marolles as a district which has always been a haven of refuge, and still is today. This approach will also highlight the fact that immigration remains a major problem in contemporary society.

To achieve our aims, we welcome contributions from individuals and associations who would like to take part in one of the proposed projects listed below, or who could provide us with anecdotes or documents for our records.

Actually you can view the following pages:

The website, called to be enhanced soon by contributions of witnesses, should lead to a more complete understanding of the realities of the neighbourhood from the early years of the arrival of the Jewish refugees until their tragic epilogue. 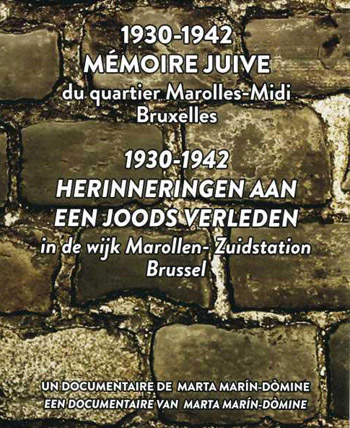 Order online
Booklet accompanying the DVD (in French an Dutch)

Photos of the presentation day