The Trip - Auschwitz Foundation
The Trip

under the High Patronage of His Majesty the King

Also with the support of the European Commission

On 5 May 2015 the Train of 1000 leaves Brussels-South at noon. With stops in Namur, Wasserbillig (Luxembourg), and Darmstadt (Germany) and bound for Poland 1000 European youngsters from some 10 countries (Belgium, Portugal, France, Italy, Hungary, Estonia, Croatia, Germany, the Netherlands, Luxemburg, and the Czech Republic).

Before departure, a ceremony takes place in the station hall in the presence of His Majesty King Philippe.

On 8 May, the anniversary of the victory over Nazi Germany, the participants attend an important international ceremony in the presence of Martin Schulz, President of the European Parliament, who has been invited by the organizers. Each participant lays a flower on his country's stone at the international monument.

On 10 May, after a 30-hour journey by train, the youngsters return home.

Departure Ceremony and Press Conference
At this event 600 people were present, 492 of whom came from all over Belgium, 17 from France, 55 from Portugal, 21 from Italy, 8 from Croatia, 6 from Hungary, and one from Estonia.
It took place in Brussels, on 5 May 2015.
The departure was preceded by an important ceremony graced by the presence of HRH Philip, King of Belgium, who had particularly expressed a wish to meet the young people. The ceremony was also enhanced by the presence of the Minister of Mobility, Jacqueline Galand, representing the Prime Minister, the Minister-President of the Federation Wallonia-Brussels, Rudy Demotte, Minister of Defense, Steven Vandeput, as well as other political authorities (Charles Picqué, André Flahaut a.o.).

Visit of Auschwitz
At this event 938 people were present, 726 of whom came from Belgium, 17 from France, 25 from the Grand Duchy of Luxembourg, 55 from Portugal, 79 from Germany, 6 from Hungary, 8 from Croatia, 21 from Italy, and one from Estonia.
It was held in Auschwitz, Poland, on 7 May 2015.
Participants were shown around by professional guides from the Auschwitz memorial, each in their own language. Some were able to meet a survivor who gave his testimonial on the same premises of his deportation. 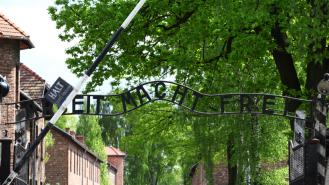 Opera Brundibar
At this event 938 people were present.
It took place in Krakow, on 7 May 2015.
Originally the opera was created and composed in the concentration camp of Theresienstadt in the Czech Republic, where it was performed for the first time. Interpreted by Jewish musicians and sung by Jewish children and teenagers, it was rewritten by surviving musicians. Train of 1000 participants attended this opera performed by children, while  on the wall period images were being projected with historical explanations in English, French, Dutch, and German. 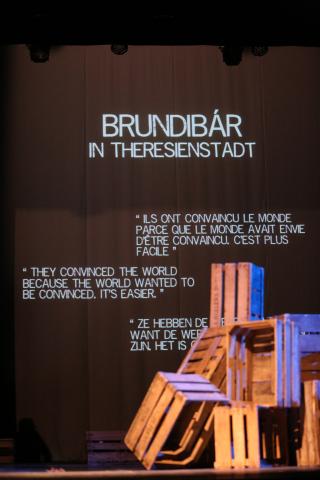 Visit to Birkenau
At this event 938 people were present.
It took place in Birkenau, on 8 May 2015.
During this visit all elements of the preparatory phase of the project came together, which helped give a human face to history.

Kroke concert
At this event 938 people were present.
It took place in Krakow, on 8 May 2015.
This is a concert of klezmer Jewish music, performed by the Polish band Kroke. It's an enchanting and special music that expresses a deep longing for Jewish musical culture and a world now gone.

International Ceremony on 8th of May
At this event 960 people were present, 727 of whom came from Belgium, 17 from France, 25 from the Grand-Duchy of Luxembourg, 55 from Portugal, 81 from Germany, 6 from Hungary, 10 from Croatia, 21 from Italy, 1 from Estonia, and 17 from the Czech Republic.
It took place in Birkenau, on 8 May 2015.
This was a commemoration for the 70th anniversary of the victory of democracy over Nazism and fascism. Those present listened to speeches from survivors as well as from Mr. Martin Schulz, President of the European Parliament. A flower was also laid down by each participant at the International Monument next to the stone of their country.