The subject of the study day organized on October 21, 2011 by Remembrance of Auschwitz and the Auschwitz Foundation at the Royal Library of Belgium, Brussels was ‘The Brussels Gestapo Headquarters – Recognition and Conservation’ and the possibility of having the building’s cellars classified as a national monument.. 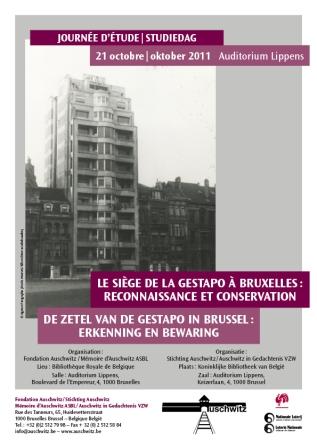 During the Second World War, the German security services (the Sicherheitspolizei and Sicherheitsdienst, i.e. the Gestapo), requisitioned three buildings situated at 453, 347 and 510 Avenue Louise in Brussels. Nothing about these buildings now attracts the attention of passers-by, except for the memorial dedicated to Jean de Sélys Longchamps and a plaque on the facade of 453 Avenue Louise. (On 20 January 1943, Jean de Sélys Longchamps, a Belgian aviator who had joined the British RAF, machine-gunned the Gestapo buildings from the air, severely damaging them).

Yet they are among Belgium’s most important and most symbolic Second World War sites of evil memory, as they were the premises of those who carried out the arrests of so many resistance fighters and organized the deportation of the Jews of Belgium and the north of France. Indeed, many survivors have given testimony on the interrogations and tortures which took place in them.


The morning session dealt with the history of the Brussels Gestapo headquarters and some of its branches and offshoots in Belgium and northern France. The afternoon will be devoted to the possibilities for conserving the inscriptions carved on the cellar walls by the Nazis’ victims.