Remembrance of Auschwitz and the Auschwitz Foundation organised the conference ‘75 Aktion Reinhardt - Aktion Erntefest’ on 3 and 4 November 2018 in Brussels. 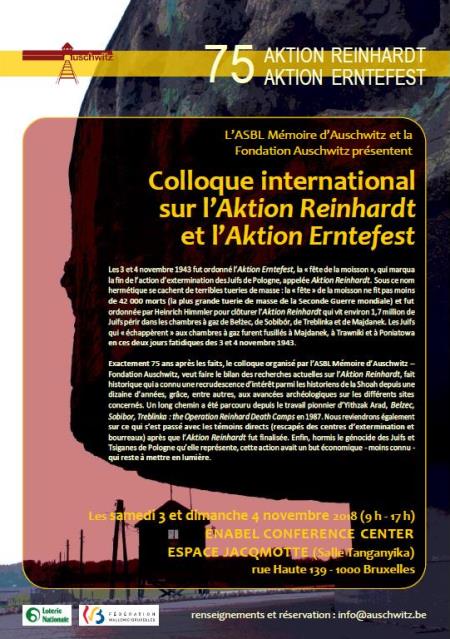 On 3 and 4 November 1943, the Aktion Erntefest was ordered, the ‘Harvest Festival’, which marked the end of the extermination of the Jews of Poland, called the Aktion Reinhardt. This hermetic name conceals terrible mass killings: the harvest 'festival' killed no less than 42,000 people (the largest mass killing of the Second World War) and was ordered by Heinrich Himmler to close the Aktion Reinhardt, which saw some 1.7 million Jews perish in the gas chambers of Bełżec, Sobibór, Treblinka and Majdanek. The Jews who 'escaped' the gas chambers were shot in Majdanek, Trawniki and Poniatowa on those two fateful days of 3 and 4 November 1943.

Exactly 75 years after the events, the conference organised by Remembrance of Auschwitz and the Auschwitz Foundation aimed to take stock of current research on the Aktion Reinhardt, a historical event that has seen a resurgence of interest among historians of the Holocaust over the last ten years, thanks, among other things, to archaeological advances at the various sites concerned. We have come a long way since Yithzak Arad's pioneering work in 1987: Belzec, Sobibor, Treblinka: the Operation Reinhard Death Camps. We will also return to what happened to the direct witnesses (survivors of the extermination centres and executioners) after the Aktion Reinhardt was finalised. Finally, apart from the genocide of the Jews and Roma and Sinti of Poland, this action had an economic purpose - less well known - that must still be brought to light.